Schizophrenia is a chronic brain disorder that affects a person’s perception of reality. This mental illness affects less than one percent of the U.S. population but profoundly impacts those who live with schizophrenic symptoms. People with schizophrenia sometimes describe the condition as hearing a room full of loud voices inside their heads that can’t be turned off. Additionally, some describe the exhaustion of living with extreme paranoia.

Schizophrenia tends to be diagnosed later in life, usually after the age of 20, and affects people of all races and ethnicities. However, treatment for schizophrenia is available and allows for most of those impacted by the disorder to live full lives. Learn more about this psychological condition and the schizophrenia treatments available.

The schizophrenic disorder is among the most stigmatized mental illnesses. Therefore, sufferers of this brain disorder must not only learn to navigate their personal schizophrenic symptoms, but they must also manage the misguided perceptions of those that perpetuate mental illness stigma.

Since there is so much confusion on this topic, it’s important to ask, what is schizophrenia? And how do you recognize schizophrenic symptoms? 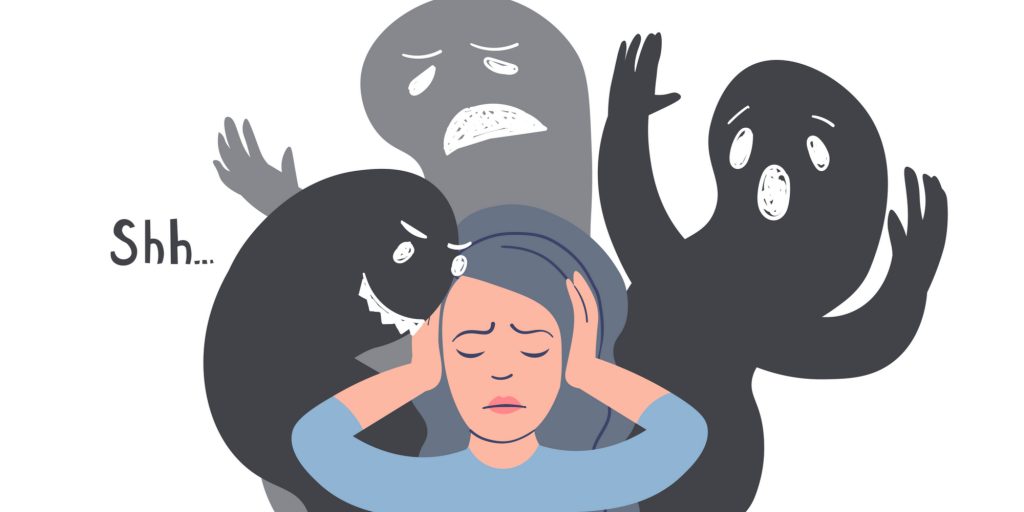 Schizophrenia is a lifelong mental disorder that affects a person’s perception of reality. This mental disorder is usually characterized by odd behavior on the part of the person suffering from the condition. Due to this, this mental illness has become stigmatized, and has historically remained mysterious in nature. However, if you view schizophrenic episodes as symptoms of a mental health disorder, the condition may make a bit more sense.

Classic symptoms of schizophrenia include hallucinations, delusions, and disoriented behavior. Therefore, schizophrenics often react to things that other people cannot hear or see, but that are very real to them. The reason this happens is not well understood, but could be due to faulty brain chemistry and a combination of genetic and environmental conditions. In any case, the degree of schizophrenic symptoms varies in severity over time, leading to seemingly random behavior. Regardless of this abnormal behavior, people with schizophrenia are not violent, despite what stereotypes of this disorder suggests. 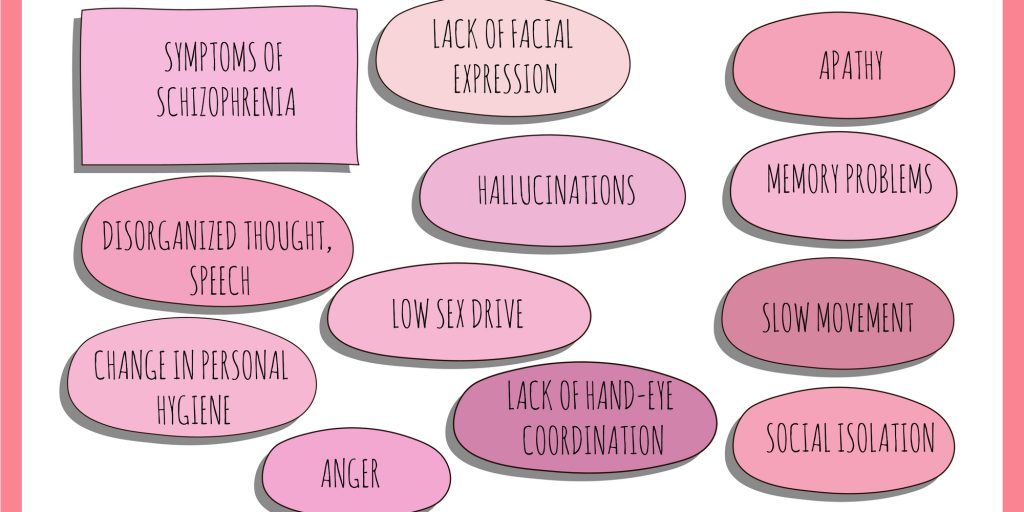 Clinically speaking, a person must meet the criteria outlined in the Diagnostic and Statistics Manual, 5th Edition (DSM-5) in order to be diagnosed with schizophrenia. The DMS-5 schizophrenia criteria require that at least two of the five types of core symptoms be present for at least one month. Additionally, these symptoms must not be attributable to any other condition, such as substance abuse. While symptoms can vary dramatically between patients, the five types of schizophrenic symptoms include:

Symptoms of schizophrenia are further categorized as positive or negative. Positive symptoms refer to symptoms that are added to a person’s behavior. These include conditions like seeing/hearing things that aren’t real (hallucinations) or believing things that are not accurate (delusions). According to the DSM-5, at least one of the five main symptoms listed must be positive in nature. On the other hand, negative symptoms involve elements that are taken away from a personality. Examples of negative symptoms of schizophrenia include a loss of emotions or social enjoyment.

A schizophrenia diagnosis can be challenging to pin down. To complicate matters, most people afflicted by this disorder are not initially aware that they’re having symptoms of anything abnormal. Rather, those around them are more likely to notice unusual behavior or an incidence of psychosis.

Schizophrenia is a difficult mental disorder to diagnose and early symptoms are even harder to catch. This is because the onset of schizophrenia usually comes on gradually. Additionally, many schizophrenic symptoms can occur at some point in a person’s life even without mental illness. Early signs of schizophrenia include:

Notably, the onset of symptoms rarely occurs prior to late adolescence. And if they begin anywhere between the late teen years and early 20s, they could easily be mistaken for typical shifts from moving through regular stages of life. However, as symptoms progress, they are more likely to cause disruptions. Although, if caught early, schizophrenia treatment is thought to allow for better management of symptoms before they get out of control.

The causes of psychotic or mental disorders are incredibly difficult to determine. However, structural changes in the brain that occur during fetal development (or any time later in life) are thought to be a major factor. In addition, a family history of schizophrenia and experiencing intense trauma are thought to be culprits. Other risk factors associated with schizophrenia disorder include exposure to environmental toxins and substance abuse. In general, any combination of experiences that alter the brain’s chemistry can predispose a person to psychological problems, including schizophrenia. However, exact causal agents are not well understood.

Substance abuse intersects with psychosis in several ways. First, chronic drug use can alter the brain’s chemistry and invite a host of mental and physical problems, including drug-induced psychosis. Stimulants are commonly observed to have this effect. Drugs like meth and amphetamines (i.e., the ADHD medication Adderall) have been reported to cause delusions and hallucinations among users during both the intoxication and withdrawal phases. In some cases, these symptoms subside as the drugs leave the person’s symptoms but in other cases, drug-induced psychosis is thought to “kick-off” a pre-existing psychotic condition. In a similar fashion, hallucinogens such as LSD are also blamed for inducing psychotic episodes.

Another way substance abuse relates to schizophrenia is in regards to self-medication. Symptoms of mental illness can be incredibly distressing, and it is not unusual for those affected to attempt to soothe themselves with drug or alcohol use. For example, schizophrenia and alcohol abuse are common co-occurring conditions. Unfortunately, substance abuse almost always worsens symptoms of mental illness, leaving a person worse off than where they started. In addition, consistently using any drug or alcohol can open the door to addiction. 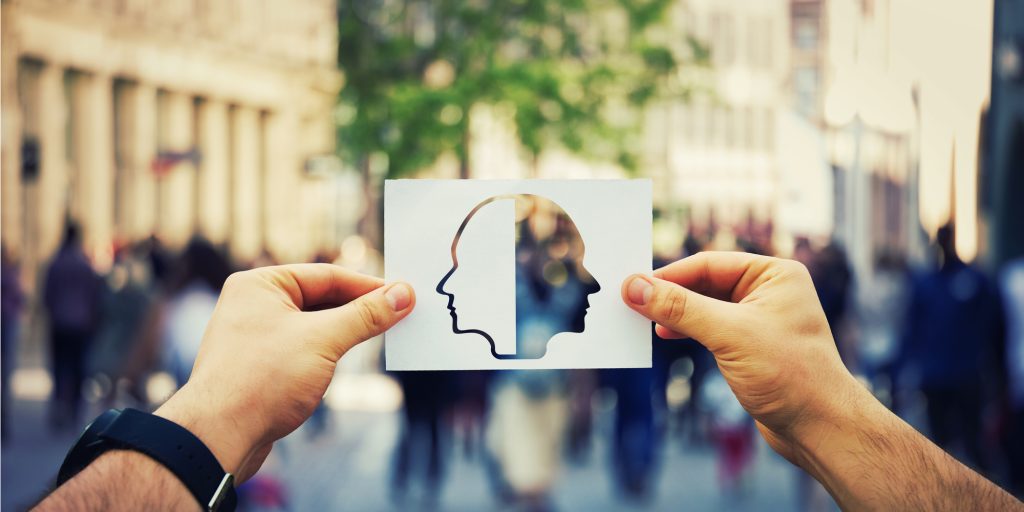 Unfortunately, there is no known cure for schizophrenia so this mental illness is usually a lifelong disease. However, various levels of care for psychosis have allowed many of those affected to live productive lives. Ideally, a network of professionals would contribute to a schizophrenic treatment plan. For example, a physician, mental health counselor, and psychiatrist could all provide beneficial input on how to best approach mental health treatment. However, one of the best places to start is usually an inpatient behavioral hospital, where a person has around-the-clock care to help determine the next best steps in mental health care.

Optimal treatment for schizophrenia includes both medication and psychotherapy as well as establishing a support system to assist as needed. At Georgetown Behavioral Hospital in southwest Ohio, our treatment teams are well versed in these therapeutic interventions. In fact, our mental health facility offers several programs to assist in mental health recovery. These include our:

In addition, our inpatient behavioral health hospital offers a variety of counseling formats to suit each individual. Examples of these include: